Nikša Varezić, Suffice to say it in Rome to have the whole world know

Home » Nikša Varezić, Suffice to say it in Rome to have the whole world know 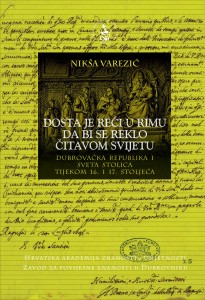 Nikša Varezić’s study focuses on one of the most important international relationships of the Dubrovnik Republic – the relationship between Ragusa and the Holy See during the sixteenth and
seventeenth century. This comprehensive study, which encompasses almost four hundred pages, offers a first systematic overview of the problem based on the documents from both the Ragusan
and the Vatican archives. Varezić tackles key themes such as the geopolitical framework, diplomatic rhetoric, and the Republic’s representatives in Rome. He also offers a detailed analysis of several profound crises which clearly illustrate the nature of this relationship: the two wars between the Christian leagues and the Ottoman Empire in the sixteenth century and the dramatic period after the great earthquake of Ragusa in 1667.