World anthropologies and privatization of knowledge: engaging anthropology in public 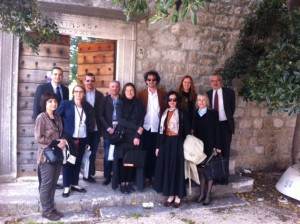 International Union of Anthropological and Ethnological Sciences (IUAES) held an inter-congress in Dubrovnik from 4 May till 9 May 2016 entitled World anthropologies and privatization of knowledge: engaging anthropology in public. Within the main track World anthropologies: peripheries strike back, and as a contribution to the ongoing research project HRZZ 5106 (COLINDA), the panel Spiritual kinship in the European peripheries aimed to investigate godparents’ and witnesses’  networks (kumstvo) as a means of social integration and identity creation was organized. The panel convener was Rina Kralj-Brassard and the co-convenor Lovro Kunčević, both members of the Institute for the Historical Sciences of the CASA. The panel included six co-authored contributions related to the European peripheries covering the periods from the sixteenth to the twenty-first century. It took place at the Institute for the Historical Sciences of the CASA in Dubrovnik on 5 May 2016.

Danijela Doblanović,  Marija Mogorović Crljenko, Godparents and witnesses – Istrian examples from the end of the 16th and beginning of the 17th century
Marko Rašica, Ljiljana Marks, “Kumstvo“ on the island of Lastovo
Ariana Violic-Koprivec, Nenad Vekarić, Godparents of the Catholics in Dubrovnik (1870-1871)
Marinko Marić, Rina Kralj-Brassard, Marriage witnesses in the parish of Ravno in the first half of the 19th century and their customary role
Isabelle Robin, Vincent Gourdon, Territories and godparenthood: a case study in the 19th century Parisian suburbs
Ivana Lazarević, Irena Ipšić, Vedran Stojanović, Informal power structures and godparents’ network of the Dubrovnik nobility in the second half of the 18th century