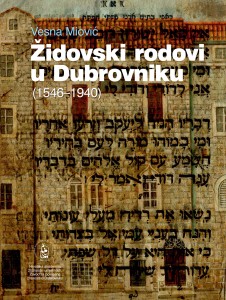 The monograph „Jewish families in Dubrovnik (1546-1940)“, written by Vesna Miović, has been published as the 27th book in the series „Contributions to the history of population of Dubrovnik and its surroundings.“ This study encompasses the period between the foundation of the Ghetto in 1546 and the year 1940, when the registries of Dubrovnik’s Jews cease.  In the first, textual part of the monograph Vesna Miović presents data regarding each Jewish family, gathered mostly from the rich sources of the archive of Dubrovnik Republic in the State Archives of Dubrovnik, since the source material from the later period is fairly scarce. In some twenty years of research the author has consulted numerous unknown archival sources, such as hundreds of volumes of Dubrovnik’s notary and criminal court. This rich material has enabled Miović to reconstruct economic, private and, at moments, even the intimate lives of Dubrovnik’s Jews. That same extensive material has also enabled the author to create genealogies which are gathered in the second part of the book. Of course, they are combined with the data from registries of births, deaths, and marriages which begin in 1815/25. In sum, the book lists around 500 Jewish families and represents a fundamental contribution to the Croatian historiography.